Welcome to the second instalment of 01coin's Anthology of Activity - our biweekly project update. Over the past two weeks we have been heavily focused on completing the new wallet, which - as you know - is scheduled for release on August 30. We will go into detail on that upon its release, but suffice to say it is a complete overhaul of the 01coin codebase. Without further ado, here's a sample of what we've been working on over the past two weeks.

Timeline for 01coin integration into CryptalDash 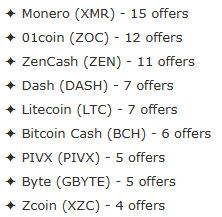 And that's a wrap for this update. Remember that the new wallet is coming out August 30 and it is a mandatory update for all VPS and local wallets. Thanks for reading, and check back September 10 for the next 01coin Project Update. If you can't stomach waiting that long for your 01coin fix, you can always follow our progress on our Trello board.